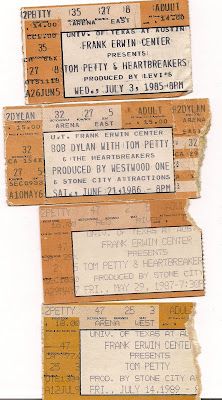 Tom Petty puts on one of the best shows in Rock and Roll, which is why I saw him so many times in my concert going heyday. The first time was after his Southern Accents album, long ago now, but Petty and the Heartbreakers already had a great body of work to draw performances from. A huge Confederate flag graced the stage behind them on this tour, but was abandoned by a slightly more politically accommodating Petty by the time of the next tour, supporting the Let Me Up album. I remember him singing It'll All Work Out from that album to only a smattering of applause , compared to some of the big hits he was doing. Petty kind of mumbled, "I think that is one of the best songs I ever wrote, but I guess it's just me."
The next time I saw him he shared the ticket with Bob Dylan. Petty and the Heartbreakers opened the show with a pared down version of one of their concerts, and then backed up Dylan for the balance of the show. Dylan was in fine form, playing some songs with just his own guitar and harmonica, and some with full Heartbreaker backing, which blended wonderfully.
The last time I saw Petty he was the headliner of a Rock'n'roll Caravan tour with a few other bands; the only one I remember was the Georgia Satellites. (They kinda sucked.) It was a good show, but the main thing I remember was that I had a horrible poison ivy patch, a welt the size of a frying pan on my thigh. It was weepy so I had to patch over it with paper towels and tape, and wear the baggiest pants I could find: my Dad's brown dress pants. So needless to say, I was far from comfortable, and far from the hippest lookin' cat at the show-but hey-the things we do for Rock and Roll!
Posted by Babel at 5:36 PM 2 comments: 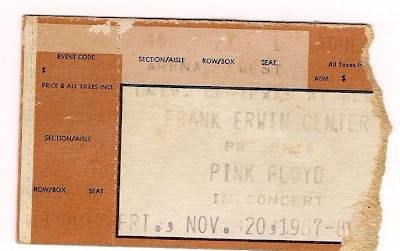 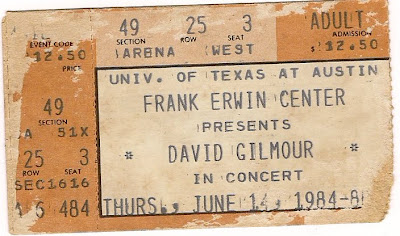 Unfortunately, I never got to see PINK FLOYD perform in their strongest incarnation: with Waters, Gilmour, Mason and Wright all together. I saw them all, just not together! I saw Gilmour during the tour supporting his second solo album About Face, in 1984, and this is the show that I have to say is at least a tie as the best concert I ever attended.
It was a great day all around, great friends, great grass, great expectations. We swam in the icy waters of Barton Springs (spotting some awesome topless sunbathers!), watched Ghostbusters on its debut, and rounded things off with Gilmour, all the while fueled on huge doobies of skunkweed.
Gilmour was relaxed and loose, his stage set was pared down compared to the elaborate Floyd shows of yore: nothing but a pair of what looked like psychedelic lighted dominoes on either side of the players and the usual rock lighting. He performed stuff from his solo albums, There's No way Out of Here,I remember particularly from his first solo album, and lots of great stuff from Face, which I enjoy more than any other solo Floyd album.
Of course he mixed in lots of great Floyd tunes, too. His playing was amazing: blistering at times, sometimes wailing; always emotional and moving. He engaged in nice moments of intimate chit-chat with the audience. He finished the show with Comfortably Numb, better than I have ever heard it , before or since. The auditorium, (which was just a curtained-off half of the Erwin Center) was snowed under with fog machines and weed smoke. (I think even the non-partakers would get a second-hand high from all the weed smoke-times were mighty different!)
Waters was touring for Pros and Cons of Hitchhiking when I saw him perform. Pros has a couple of good songs on it, but the "concept" I always thought to be kind of weak. Even though Eric Clapton was recruited as lead guitarist on the album, Gilmour was sorely missed. Clapton of course wasn't playing on the tour, but Waters had a good back-up band . He split the show into two: first half-Floyd tunes, second- Pros played in its entirety. Without Gilmour's vocal presence the Floyd stuff suffered some, but overall was good; Set the Controls for the Heart of the Sun being one of the eclectic choices performed. The stage show had a Floydian screen behind it, with the traditional accompanying images to songs like Welcome to the Machine, and the Pros stuff had Gerald Scarfe cartoons featuring Reg,( or is it Rog?) the dog, as star. Scarfe, whose work was brilliant for The Wall, kind of let his old pal Rog (and us) down on this one; the cartoons looked like they were dashed off on a cocktail napkin on his way to collect the check. We were even treated to an inflatable pig, which did not float, it only appeared and withdrew on the side of the stage. During an encore Waters sang the heartbreaking Final Cut, from the album of the same name. What should have been a highlight of the evening was somewhat marred by the very loud accompanying vocals of a nearby teenage concertgoer. (Now I can understand why Waters spit on an audience member once!) Still and all I enjoyed the show quite a bit, and a good rocking was had by all.
The Pink Floyd tour was during what we called the Psuedo-Floyd lineup: the guys sans Waters, They were supporting the Momentary Lapse of Reason album, and had all the trappings of classic Floyd; but somehow was kind of a hollow downer. This had the feeling of a payday show, a going through the motions,and great as the motions were, they lacked spirit. Gilmour, in contrast to his loose, chatty, fun persona during his solo show, was icy and robotic; barely acknowledging that this was a live show and not some audio-animatronic imitation. The effects were there, the pig was cooler than Roger's. But during On the Run, instead of the crashing airplane that graced classic Floyd and Waters' show, the Psuedoes had a crashing bed, in keeping with the bed motif of the album art. Lame. I should have felt rocked by this show but instead I felt rolled.
Posted by Babel at 4:57 PM No comments: 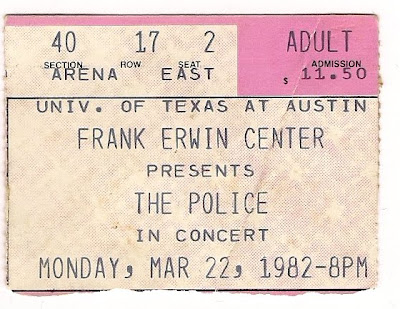 1982 seems like several lifetimes ago. Not quite seventeen, and leading quite the provincial life, my appreciation of music was limited to the radio and the record player. My oldest brother and his friends were several years older than I , and to my young mind, seemed to be quite the worldly sophisticates already. When they invited me to see The Police with them in Austin , I jumped at the chance. I remember a rainy ride up to Austin and a fantastic meal at my favorite pizzeria, Conan's Pizza , at its old location on the Drag. I wasn't real familiar with the music of The Police, but I liked Roxanne and Invisible Sun, the latter from their Ghost in the Machine album, which they were touring to promote. The smell of Clove cigarettes , pot, and a potpourri of colognes filled the smoky air.. The seats were in the nosebleeds, but the music rocked.. I remember the tiny figure of Sting jamming on his upright bass, and the sharp crack of the drums. My brother and his friends, who were more up on the bands songbook, seemed particularly happy with a encore that included a song I later grew to like, Secret Journey.
While sorting through some old papers recently, I found a clutch of old ticket stubs that I had
squirreled away over the years. Many memories were evoked, and I hope to share them in brief over my next few posts.
This was my first concert, and it was a good one, but not what I would consider near the best. Still, as they say, there's something about your first...
Posted by Babel at 9:52 PM 1 comment:

"A lot of weather we've been having lately, isn't it?" 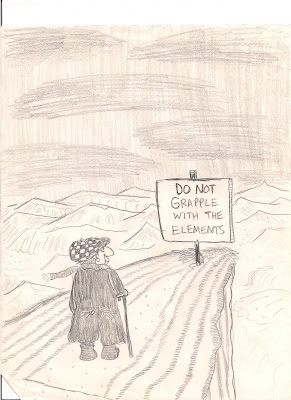 The Discourse on Civil Discourse 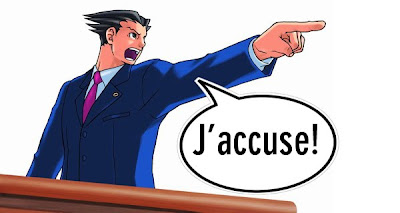 Here we go again.
Another "senseless tragedy" (as opposed to a sensible tragedy) and we are off and running.
The Arizona shooting was a bad thing that occurred in a world wherein bad things are part of the machinery.
And yet there is an attempt to "make sense" of the incident. How could this happen? The verdict was in almost as quickly as the question was posed.
It was you again.
Your unhealthy addiction to freedom of speech.
Your discourse has gotten too "uncivil".
As you tried to hash out a solution to a corrupt government, a wrecked economy, and War without end , you got too nasty, and it infected the air , causing this boy to grab a gun and go a-shooting.
"We need to use our Modern Magic, LAWMAKING, to correct these ills: okay Murder is already illegal. Let's outlaw guns, outlaw speech, outlaw shaving your head, outlaw bullets, outlaw public gatherings at Safeway. Make it against the Law to think negative thoughts when you are within 200 yards of an elected official. There must be more things we can outlaw to ensure this never happens again. Let's outlaw Death itself!"
Sorry, folks.
There are no additional laws that need to be passed. There is no one to fire. No one to kick off the air. Just one fellow among we 400 million Americans who got it into his head that taking his guns to town was a swell idea. He will need to pay for his crimes under the existing law.
AND THAT'S IT!
How can we stop this from happening again?
I hate to say it, but we can't do a thing, the numbers are against us, another person will pick up another gun, or a knife, or a bomb, or a box-cutter, and more bad stuff will happen. The only thing we can truly hope for is that more people will have the guts to try to slow the next one down a little if they can, like those few brave citizens who stopped the Arizona shooter from re-loading.
So enough already about our discourse. Civil or not , it is Ours. Sometimes in the Grown-up world we have to think, do, or say things that are unpleasant, and pinning every murder and run over kitten on our conscience will not stop us from saying what needs to be said.
Nice try, though.
Posted by Babel at 9:50 PM 1 comment: 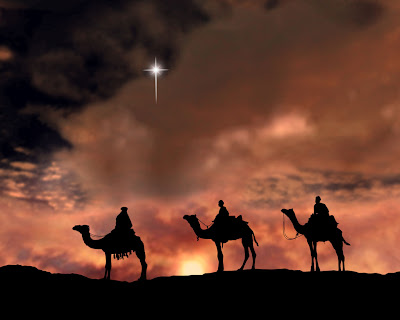 There is so much going on right now that I haven't had an opportunity to post. I have a few things I'd like to put together and present but I don't see it happening before Christmas, so, Merry Christmas to all, and here is a new picture so at least you don't have to see Bill Burroughs glowering at you!